Are you planning a family cruise vacation to Alaska? Alaska is one of the most breathtaking places I’ve ever been to. From the majestic glaciers in Juneau to the charming gold-rush town of Skagway to watching a brown bear swim in Haines, Alaska is an epic adventure. Because of the lack of interconnected highways, you can’t just road trip to Alaska since many places are only accessible by boat or seaplane.

The most convenient and relaxing way to see Alaska is on a cruise ship, especially if you are traveling with kids. Here are the best Alaska cruises for families.

6 Best Alaska Cruises for Families in 2022

Built in 2021, the Discovery Princess is a Princess MedallionClass™ship featuring the largest balconies at sea, Michelin-star chef dining options and a state of the art Princess theater.

Your kids will enjoy hanging out at Camp Discovery Kids Club on the days you are not exploring Alaska. Plus they will love meeting one of the many guests that come onboard the ship such as the lumberjack from Ketchikan and the sled dogs from Skagway.

With ports of call in Juneau, Skagway and Ketchikan, your family will have the opportunity to see glaciers, bears, salmons and a charming gold rush town. Your Alaska family cruise vacation will undoubtedly be memorable aboard the Discovery Princess.

Check Price and Availability of Princess Cruises to Alaska

Your kids will enjoy going on the water slides on the ship’s Aqua Park even if it’s a little too chilly for adults! Watch Tony Award® winning Broadway show, Kinky Boots.

After your day exploring Mendenhall Glacier in Juneau, grab a bite to eat at one of the many family friendly restaurants.

Norwegian Encore stops at the most popular Alaska ports of calls- Juneau, Ketchikan and Skagway. Your family will get to opportunity to see the glaciers in Juneau, the lumberjacks in Ketchikan and the gold rush town of Skagway! Cruising on Norwegian Encore is the perfect Alaska family cruise vacation.

Check Price and Availability of Norwegian Cruise Lines to Alaska

The Disney Wonder itinerary with sailings to Skagway, Juneau and Ketchikan will give your family a good introduction to the most popular sights in Alaska. You can’t go wrong cruising to Alaska on Disney Wonder, it’s the ultimate family friendly cruise experience.

Check the Price and Availability of Disney Cruises to Alaska

4. Royal Caribbean Quantum of the Seas and Ovation of the Seas: 7 Nights Alaska Cruise from Seattle

You can’t go wrong cruising with Royal Caribbean on your next Alaska family vacation. There are two Royal Caribbean ships sailing to Alaska, Quantum of the Seas and Ovation of the Seas. They will depart from Seattle and head north to Alaska with inside passage itineraries.

Both Royal Caribbean ships are jammed packed with family-friendly activities. Go skydiving at iFly. Grab a board and surf at FlowRider® Surf Simulator.

Order a Shirley temple from the robot bartender at Bionic Bar®. Go on the North Star for breathtaking 360 views of the glaciers! Go rock climbing on the ship. Play at the massive SportsPlex.

Quantum of the Seas and Ovation of the Seas stops at the most popular Alaska cruise ports- Juneau, Ketchikan, Sitka and Skagway. Your entire family will have blast sailing to Alaska on Royal Caribbean!

Check Price and Availability for Royal Caribbean Cruises to Alaska

Onboard the Carnival Spirit and Carnival Splendor, kids will be treated to Dr. Seuss inspired activities ranging from storytime to parades to character breakfast. Green eggs and ham, anyone?

Older kids (and adults) will have a blast going down the Green Thunder water slides at WaterWorks! There is also an indoor pool in case the Alaskan temperature becomes too chilly even for the kids.

Picky eaters will love the kids menu at Carnival cruise line serving kid approved food like spaghetti with meatballs and mac and cheese.

Carnival Spirit and Carnival Splendor have ports of call at the most popular Alaska destinations. Depending on your sailing date, you will have the chance to see Sitka, Juneau, Ketchikan and Skagway. Families always have a great time sailing to Alaska on Carnival Cruise line.

Check Price and Availability of Carnival Cruises to Alaska

Despite the fact that Holland America’s activities and onboard programs are geared more towards adult guests, Holland America has a fantastic kids club that rivals that of other cruise lines.

The 7 nights Alaska cruises from Vancouver on Koningsdam and Nieuw Amsterdam have ports of call at the most popular Alaska destinations- Juneau, Skagway and Ketchikan. Cruising to Alaska on Holland America will undoubtedly be a memorable experience for families.

Check Price and Availability for Holland America Cruises to Alaska

I’ve taken over 20 cruises with various cruise lines. All cruise lines, in my experience, offer similar experiences for families- they all have a kids club, a kids menu and kid-friendly activities. The price, date, ports of call, and newness of the ship will determine which cruise is best for your family vacation to Alaska.

The Alaska cruises listed above all have similar inside passage ports of call. The date, price, and newness of the ship will determine which cruise ship you choose for your family vacation.

I’ve listed below the Alaska cruise ships and the year they were built.

The two newest ships on this Alaska cruise list are the Norwegian Encore and Discovery Princess. Disney Wonder is the oldest ship but the Disney experience makes up for being an old ship! Carnival Splendor and Carnival Spirit are older ships on this list, but Carnival typically has lower prices, which compensates for the age of the cruise ships. In terms of age, the Royal Caribbean and Holland America cruise ships are in the middle of the pack, so price and date will be deciding factors.

Remember that when deciding which Alaska cruise is best for your family vacation, you should also consider the departure port. Some of the cruises on this Alaska cruise list depart from Vancouver, while others depart from Seattle. Depending on where you live, you should calculate the cost of a plane ticket to both Vancouver and Seattle to get a more accurate picture of the total cost.

No matter which Alaska cruise you choose for your family vacation, you will have the most unforgettable vacation of your life. Alaska is a breathtakingly beautiful place where you will be in awe of the glaciers, bald eagles, bears, and the stunning views. Going on an Alaska cruise will be one of the most amazing vacations you’ve ever had.

Family Vacation 101 participates in affiliate programs including Amazon Associates Program and may earn from qualifying purchases. 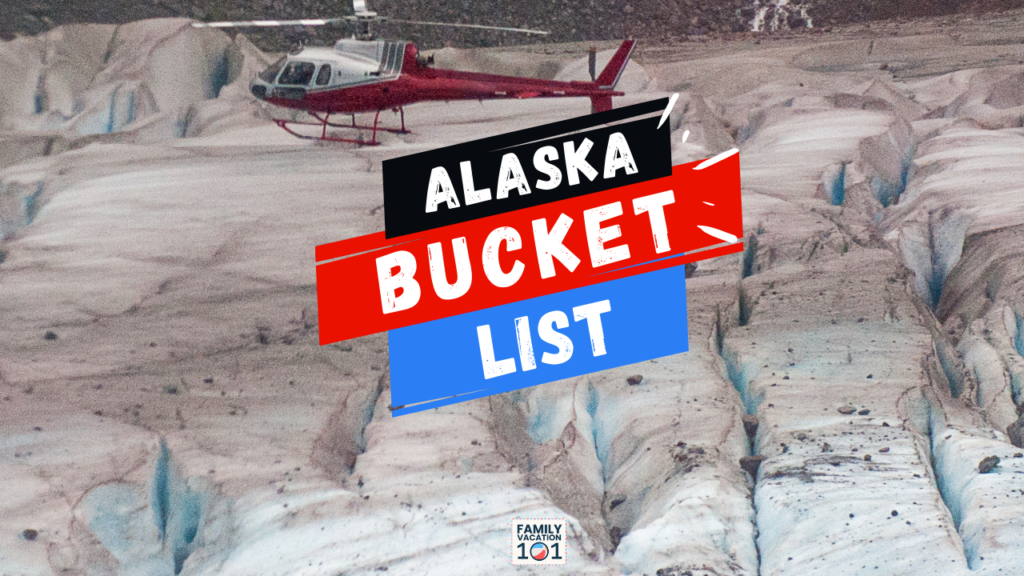 Are you planning a vacation to Alaska? Alaska is truly America’s last frontier. You will have plenty of opportunities to get up close to see…