With its looming skyscrapers, mesmerizing lights of Times Square, and historic Grand Central Terminal, Midtown is the quintessential Manhattan neighborhood. There are a variety of sights and activities to entertain children in Midtown, ranging from Rockefeller Center to riding the Carousel in Bryant Park. What’s more, these activities are completely free (almost free)! Here are free things to do with kids in Midtown Manhattan NYC.

8 Free Things to Do with Kids in Midtown Manhattan

The most iconic train station in New York is also one of the busiest transportation hubs. Grand Central Terminal, which was built between 1903 and 1913, is recognized for its beautiful Beaux-Art architecture as well as its transportation connections.

Kid Friendly Things to Do at Grand Central Terminal

Don’t miss the four-faced clock situated atop the information desk on the main Concourse. This distinctive clock, with its opal faces, sits in the terminal’s heart.

Take a peek at the busy train platforms!

The best times to visit Grand Central Terminal with kids are in the evenings and on weekends, when the crowds are significantly reduced. Every day, about 750,000 commuters walk through the huge hall of the Grand Concourse!

There are restrooms near the food court.

The New York Public Library is one of the city’s premier institutions, with its majestic Lions protecting the entry  and steps leading up to the entrance of the iconic Beaux-Arts building. The library first opened its doors in 1911 and is home to impressive collections such as iconic children’s books and first editions, as well as historical artifacts like Thomas Jefferson’s manuscript copy of the Declaration of Independence.

Kid Friendly Things to Do at the New York Public Library

For the most part, the New York Public Library is a quiet space for adults. However, there are some kid friendly things to do at the New York Public Library. You can go check out the original Winnie the Pooh toys that belong to Christopher Robin Milne, the toys that inspired his father A.A. Milne to write his famous Winnie the Pooh book. You can take a free 15 minute tour of the library. And don’t forget to say hi to the famous library lions by the front door!

Fun Fact: What are the Names of the New York Public Library Lions?

Go on a carousel ride at Bryant Park. Bryant Park is one of Midtown Manhattan’s most picturesque public areas. It’s a beautiful park centrally located in midtown, right behind the New York Public Library. Take a break from the hustle and bustle of New York City and enjoy the lush lawns, flower beds and pebbled walks.

Kid-Friendly Things to do at Bryant Park

How Much are the Carousel Rides at Bryant Park?

Carousel rides at Bryant Park are $4 per person.

With bridges arching over the water and ducks drifting calmly along the shady perimeter of the pond, Central Park’s pond is a terrific spot to unwind. Your children will be entertained by the ducks. Keep an eye out for the mother duck and her ducklings! A stop at Central Park will surely burn off some energy!

Featuring a lively plaza and a popular rooftop observation deck, Rockefeller Center is packed with stores, restaurants, and offices. It’s a popular spot for both residents and tourists for people watching.

The world-famous Rockefeller Ice Skating Rink is a must-see during the winter. And don’t forget about the Rockefeller Christmas Tree! A trip to Rockefeller Center would be incomplete without a stop at the Nintendo World, American Girl Place, or Lego Stores.

For the American Girl fan, a visit to New York City is not complete without a visit to American Girl Place. It’s a dream come true doll emporium for little girls (and big girls). You can easily spend hours browsing and looking at all the dolls and accessories!

The Lego Store is a fun place for kids to visit. Playing games and building with Legos for hour(s)!.

Best Time To Go with Kids to Rockefeller Center

Just across the street from Rockefeller Center is Saint Patrick’s Cathedral. It’s one of the most prominent Catholic cathedrals in the country. Walk around the perimeter of the cathedral, admire the beautiful Gothic Revival architecture, religious figures and massive bronze doors. A visit to Saint Patrick’s Cathedral is a much-needed respite from the frenzy of New York City.

How much is admission fee to Saint Patrick’s Cathedral?

From 42nd to 47th Streets, Time Square is one of the busiest intersections in the world. A trip to New York City would not be complete without a stop in Times Square. Watch your kids gawk as they marvel at the flurry of activities- from the massive billboards, to street vendors to the rush of people to cabs to double-decker tourist buses!

Remember to look up to see where the New Year’s Eve ball is dropped. Make a pit stop at Hershey’s and M&M stores.

Satisfy your sweet tooth and stop by the massive Hershey’s and M&M World located right at the heart of Times Square. Your kids will be mesmerized when they step into the magical world of chocolate. Get chocolate souvenirs, have a milkshake at the Hershey’s store, check out the amazing candy wall all while inhaling the sweet aroma of chocolate. Check out the interactive play area at the M&M store.

8. Kayak on the Hudson River

You May Also Be Interested in Other Free NYC articles: Free Things to do with Kids Downtown Manhattan and Best Playgrounds in NYC 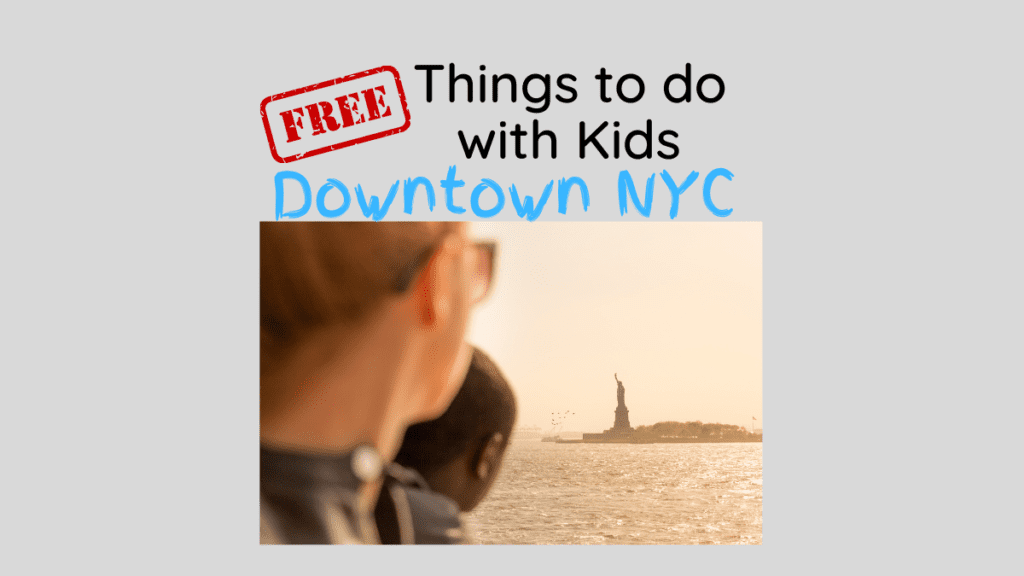 There are so many free things to do with kids in New York City. If you are staying in downtown Manhattan or are exploring downtown… 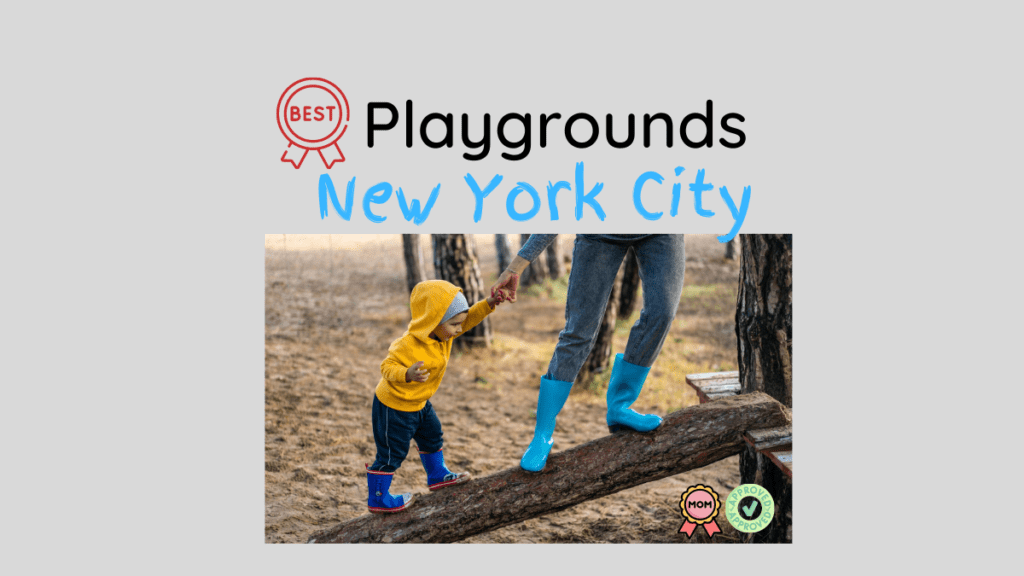 Wondering where the best playgrounds are in New York City? There are over 1400 parks and playgrounds in NYC! As a local mom, I’ve taken… 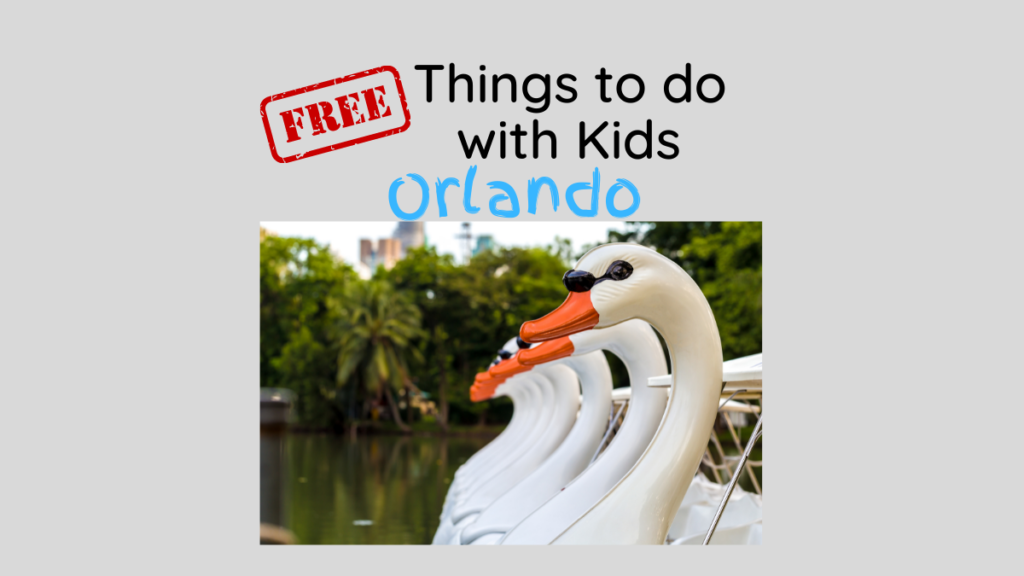